I combined one storey of a District 5 Apartment with the L-Shaped Building to create this structure that will take up a good chunk of table. 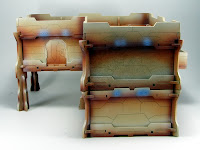 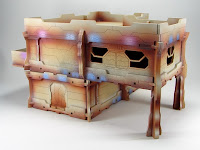 I used the same color scheme as the last guard tower.

You may have heard talk about people "Sealing" their MDF terrain before painting. If you look closely at the pictures, you can see why you may need to. The fiber board is extraordinarily "thirsty," and just soaks in paint - plus, it gets fuzzy. I thought a triple primer layer would be sealing enough... but perhaps I'll try sealing it with some hairspray before I prime.

Still, good enough for the tournament. I'm calling this one "Done."

Posted by Schadlez at 9:00 AM No comments:

Finished up another Micro Art Studio Guard Tower tonight. I'm starting to get the hang of the airbrush and get quicker with it - this took me under two and a half hours. 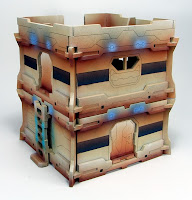 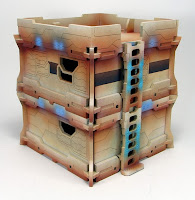 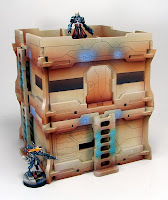 The Brown Stripe was first masked off with blue Scotch painter's tape, then:

As usual, the lights were first painted with white, and then colored with Badger Minitaire Ghost Tints - Blue and Plasma Fluid, this time.
Posted by Schadlez at 10:49 PM 5 comments:

Well, GenCon has come and gone and I am slowly recovering. Not the normal recovery of voice and exhaustion, but the recovery of standing on solid concrete for ten hours a day for four days straight...

So while the trip to Indianapolis was definitely a lot more work than it was pleasure, I am now able to get back into prepping for our DuelCon tournaments.

Harry from Warmill has come through for the Infinity events at DuelCon in a BIG way. Not only did he offer me a wholesale discount so that I could populate a table with his terrain, he included more prize support than any other company we've asked to date.

I've started last-minute construction of the terrain I purchased:

I still have three sets left to build, which I will tackle tonight. But look at all the awesome stuff they sent in to give away as prizes!! 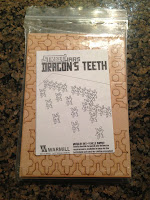 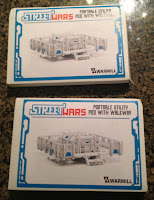 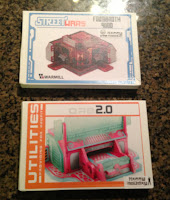 I don't know how much that costs in retail, but I'm pretty sure it's like a million dollars.

They also sent these - and I can't even find them on their web site for sale! Are they, perhaps, some super-secret preview product only available at DuelCon?!? All I know is... they're awesome! 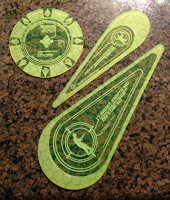 As far as assembly - These Warmill buildings slot together SO much more smoothly than their MAS counterparts. Anyone who has built an MAS building knows that you wake up with a raging case of "Nintendo Thumbs" the next morning. With these, they have shaved off whatever fraction of a millimeter that they needed to to make them fit together easily. Sure, you have to glue them - but I was gluing the Micro Art stuff anyway! These went together like a DREAM. And they have comprehensible instructions. Imagine that.

The little traffic barriers are pretty cool. They transform! When opened like in the first picture, they presumably stop traffic and provide cover. But when the local planetary militia needs to move them elsewhere, they collapse into a flat pack that can be carried. And the models actually DO THAT. Neat stuff.

Their sense of humor is remarkable, too. The FoodBooth model that I chose was the "Dolphin Shack." Intelligent... and Delicious! Lots of jokes on the acrylic menu signs. Good stuff. Lots of character from their whole range.

Posted by Schadlez at 6:29 PM No comments:

Before I disappear to GenCon for a week, I got 3 quick Micro Art Studio Info Hubs done for DuelCon.

For the Black, over Black Primer I airbrushed P3 Coal Black. To that, I mixed in P3 Exile Blue. To that mix, I added in P3 Underbelly Blue for two more highlights. Shadows added in with P3 Sanguine Base and P3 Thamar Black. I then (very quickly and messily) lined with that final highlight color.

Light bits were hurriedly sketched in with white, then Ghost Tinted with Plasma Fluid, Blue, Yellow and Green.

Like Space Marines? Well, they are the next codex coming for Warhammer 40,000 and the guys at 40K Radio have a PDF copy - so all of their rumors are true. Check out their Facebook Page for all the juicy bits.
Posted by Schadlez at 8:06 AM No comments:

On Episode 17 of the Infinity O-12 Podcast, we had a Fan Art Contest, and the winner was announced on Episode 18. Running away with it, David Montalvan made this awesome design of Scarface & Cordelia: 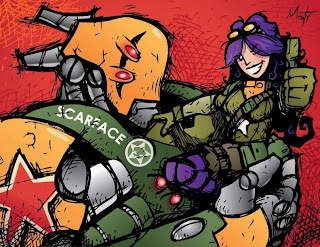 It was so awesome, in fact, that we just HAD to make T-Shirts of it. Working with a local screen printer, we are able to offer these T-Shirts for $15 apiece ($18 for double and triple XL). $6 US/Canada Shipping, and $12 International. They'll be available in Red or standard gamer Black.

You can send payments via PayPal to TSchadle@gmail.com  Just make sure to include your Name, Mailing Address, Shirt Size and Color Preference in the notes.

We need to get 36 or more orders to make them, though. We have about 25 so far. If you'd like one - do it now! We're only doing a single print run. If you know someone you think might dig it - by all means, let them know!

Our original order deadline was this Sunday, August 11 - but if we don't get enough, we'll hang on to hope one more week and see what we have when we get back from GenCon.  If we don't hit 36, any orders will get immediately refunded.
Posted by Schadlez at 1:13 AM No comments:

I've been busting out a bunch of the scatter terrain I've collected whenever I get a free hour or so. First, I finished the final two barricades I got from Defiance Games.

Next, I did some "Waste Bins" from Micro Art Studio (although they are more of the size of a trunk you might keep pool toys in...)

MAS also has these very cool sci-fi crates. Each batch of 6 took less than an hour.

Finally, I painted three of the MAS "Human Consoles." A lot of the missions have 3 Objectives, and these will work great for them.

I'm Too Sexy for Terrain

I've got the MAS Catwalks all painted up now, although I do need to get another set of them. 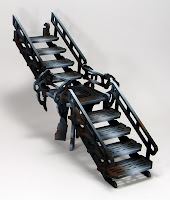 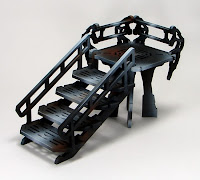 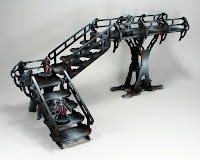 This kit went together the easiest out of all the different MAS ones. And painted fast as well. 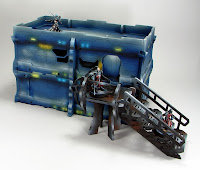 If I remove the balcony, I can use the steps as a fire escape up to the second floor door.

I have armor for these catwalks that I can hang on them to add extra cover. But before I get to the armor, I have 7 more MAS buildings to paint! DuelCon is Coming.

Simple enough to airbrush on: Base coat with VMC Neutral Grey, Highlight with VMC Light Grey, Further Highlights with VMC White. Then Shade with VMC Black Grey, and finally VMC Black. A little staining was airbrushed on with P3 Bloodstone.
Posted by Schadlez at 1:52 PM 2 comments:

This MAS Building has the blues... 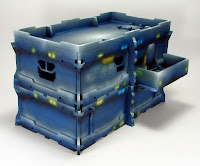 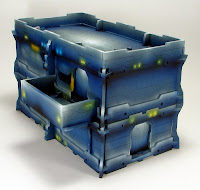 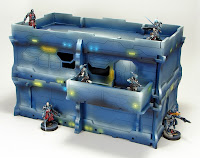 Appropriate for the Military Orders to have invaded the building, as we cover PanOceania sectorial armies in Episode 18 of the Infinity O-12 Podcast.