Over on MayaCast*, we are running a little Infinity painting contest. Just a single figure, nothing fancy, winner gets an Infinity boxed set. We just wanted to encourage everyone to get another figure painted up this month for their army, so we decided the hosts better participate, too! This is what I got done.

This is the Hatail Spec-Ops model of the Tohaa faction for Infinity: The Game. Spec-Ops can represent any of your basic troop types, are packaged with a variety of extra weapons, and in Campaign: Paradiso they can use Objective Points to increase their stats as well as buy new equipment and skills.

I have named this one Leeam Neesaan (which is kinda funny if you are familiar with Tohaa names), but he died in our Campaign, so now he is Leeam Neesan Ahl-so. 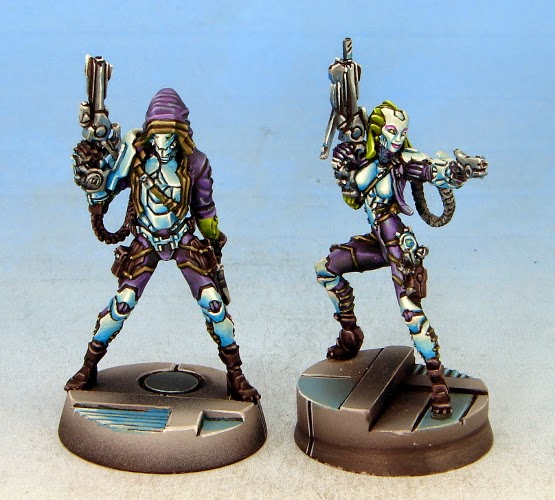 There the two Spec-Ops models pose together: Leeam Neesan and Aelis Keesan. Then the whole family of Tohaa so far.

*MayaCast is the Infinity podcast that I host with Kip Parcell, in case you didn't know. If this is the first you're hearing of it, we sure would appreciate your "Like" on our Facebook page, and even if you don't listen, we will happily accept your download of the monthly shows. Or subscribe to the RSS Feed.
Posted by Schadlez at 8:00 AM 3 comments:

The Oniwaban are from the Yu Jing faction of Infinity, and are also part of the Japanese Sectorial Army. 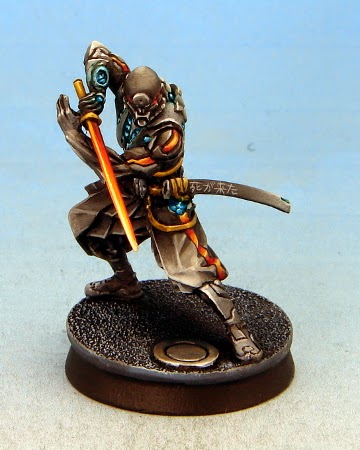 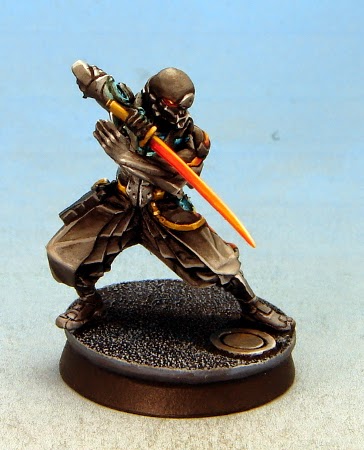 Since I had already opened the box that he came in to do the Keisotsu Butai for demo games, he looked pretty straightforward and I wanted to see how fast I could finish him. He took between 4 and 5 hours. 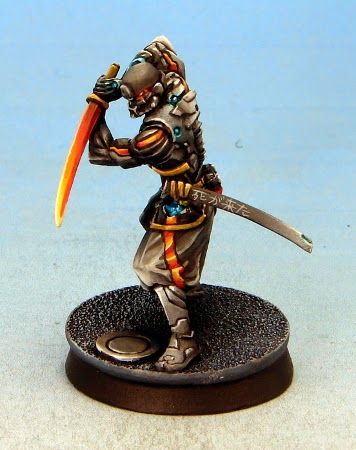 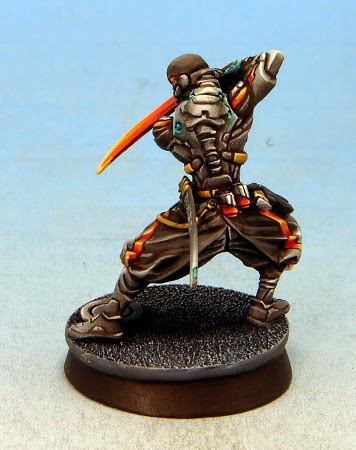 The black is Black (unsurprisingly), highlighted with a mix of Black and VMC Black Grey, then pure Blak Grey, VMC Neutral Grey, VMC Light Grey, and finally some white to make the armor plates shine. 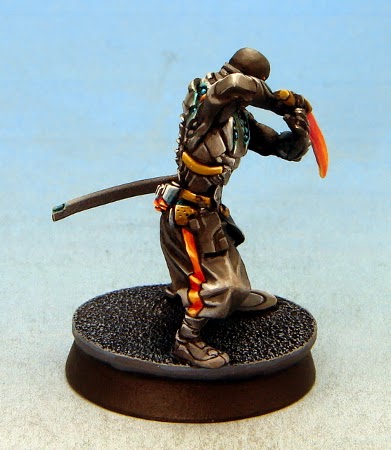 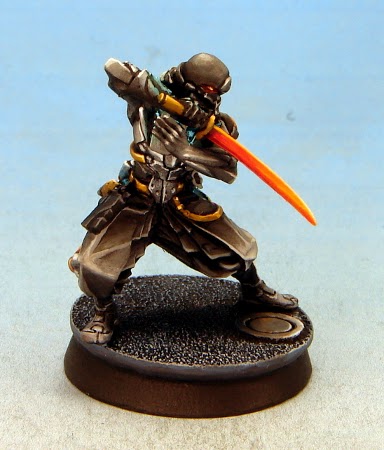 Seven or eight months ago, I had partially painted a bunch of Order Sergeants for the Military Orders of PanOceania, enough to get them on the table. I never went back and finished any of them until now - A few touch-ups, some extra highlights here and there, and I had to add the crosses to their tabards. 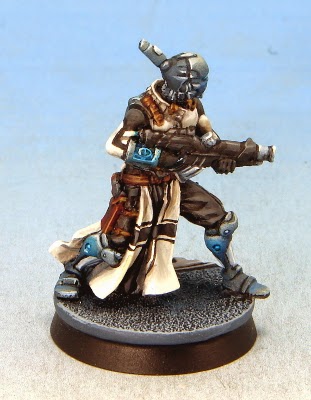 Now these two Game Quality minis are as finished as I'm going to make them, and bolster the ranks of my PanO. I'll use them to give demo games as well. 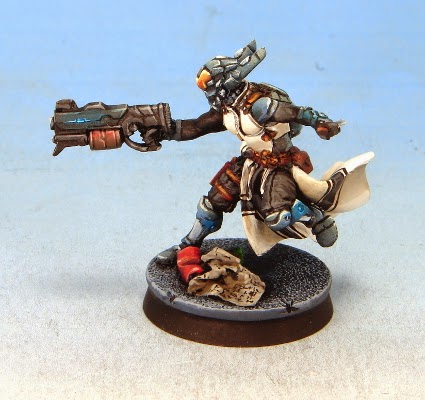 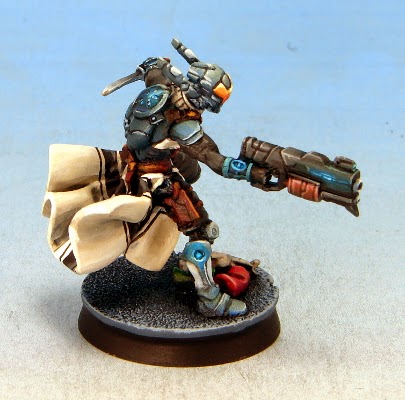 Posted by Schadlez at 8:00 AM No comments:

This civilian miniature can be found in the Dire Foes Mission Pack #4 - Flee or Die that features Indigo Brother Konstantinos vs Hassassin Husam Yasbir. I needed a civvie model for our next Infinity mission, so got this one painted up.

The jacket, skirt, and stockings were painted Black, VMC Black Grey, VMC Neutral Grey, and VMC Light Grey. The stockings were then glazed with VMC Smoke. 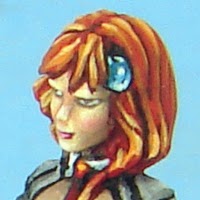 I have painted up a fire team of Keisotsu Butai - Line Infantry for the Yu Jing Faction of Infinity: The Game. 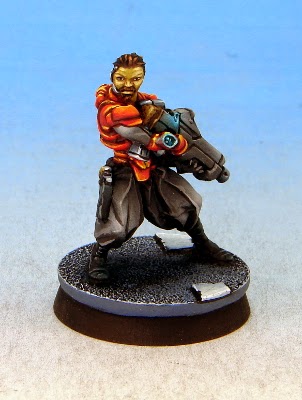 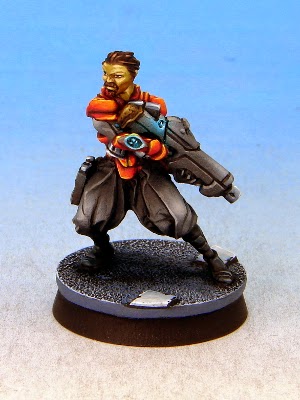 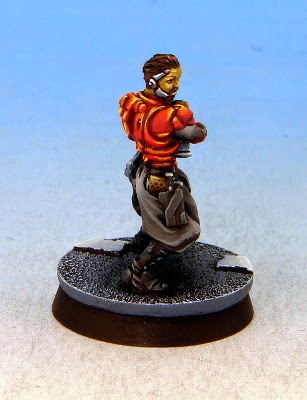 Four of them I will be using to run demo games; but since I was already painting four, I might as well get the fifth one done at the same time. 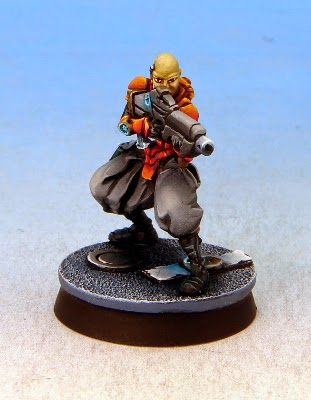 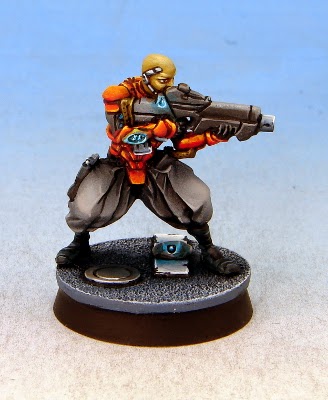 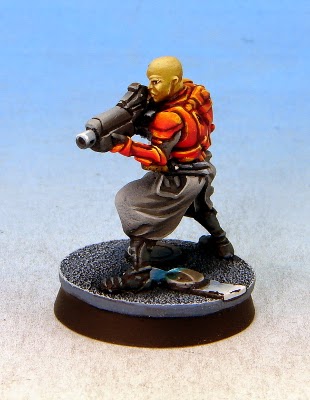 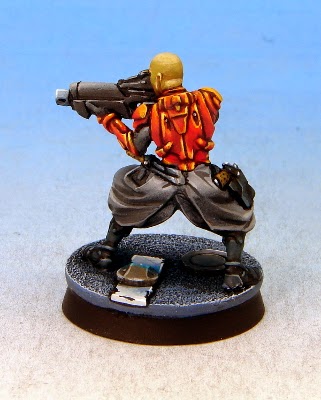 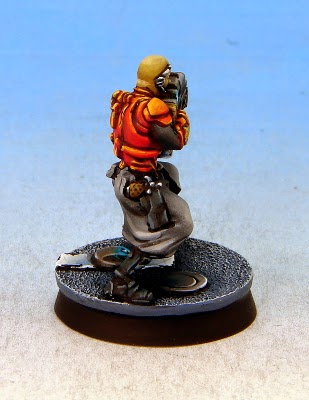 The team features three Keisotsu Butail with Combi-Rifles, one with a Missile Launcher, and one with an HMG. 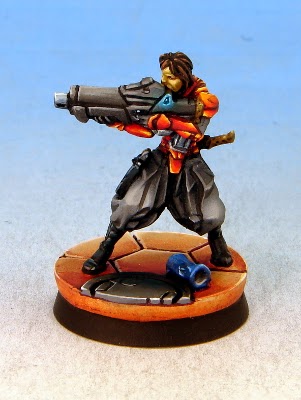 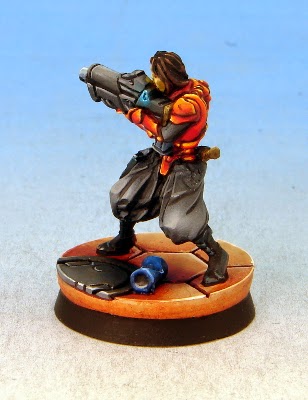 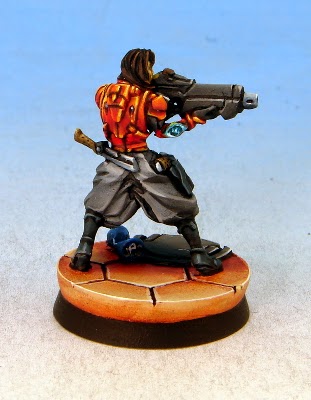 The Keisotsu are older Infinity sculpts, but the one-piece design of the combi-rifle infantry made them very appealing to use for demo games. 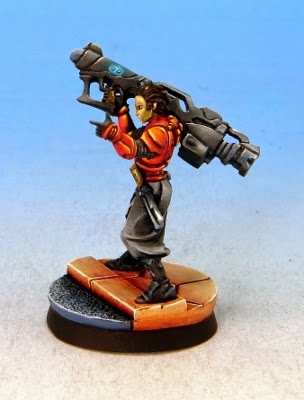 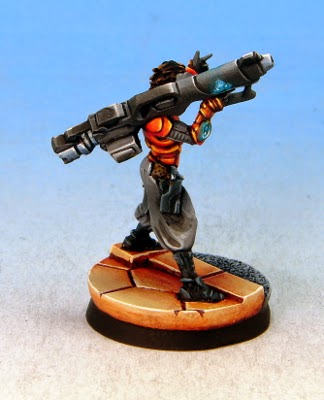 The orange-red color was based with Vallejo Model Colour 814 Burnt Cadmium Red. The darker Vallejo reds cover very well in a single coat over a black undercoat (which is what I always use).
The highlights were then built up with P3 Skorne Red, P3 Khador Red Base, GW Blazing Orange, VMC 911 Light Orange, P3 Heartfire, and VMC 949 Light Yellow. 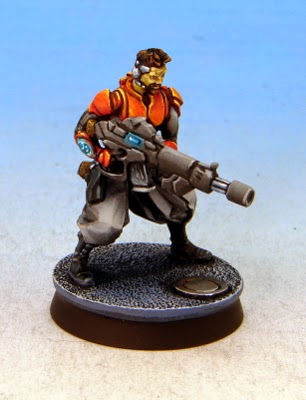 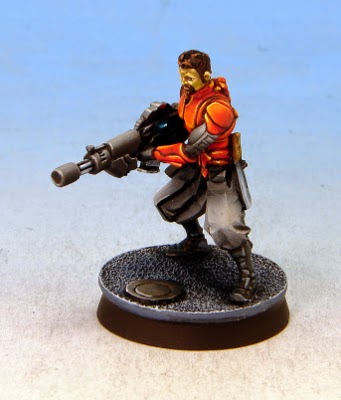 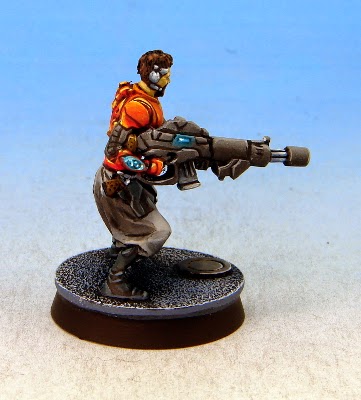 The grey cloth of the pantaloons was airbrushed over the black primer, first with VMC 862 Black Grey, then VMC 992 Neutral Grey and lastly VMC 990 Light Grey. Line highlights were added with those last two colors, and I used black grey and black to brush in lining and shadows between pleats. 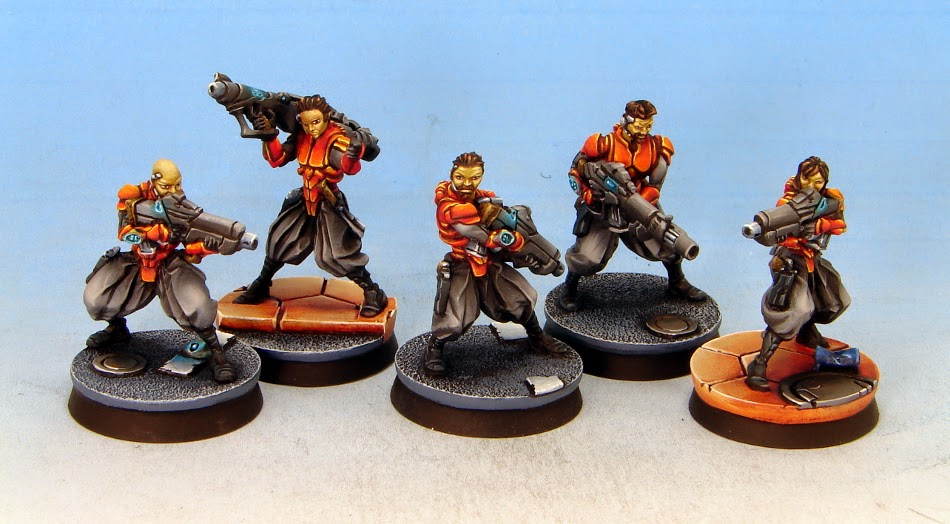